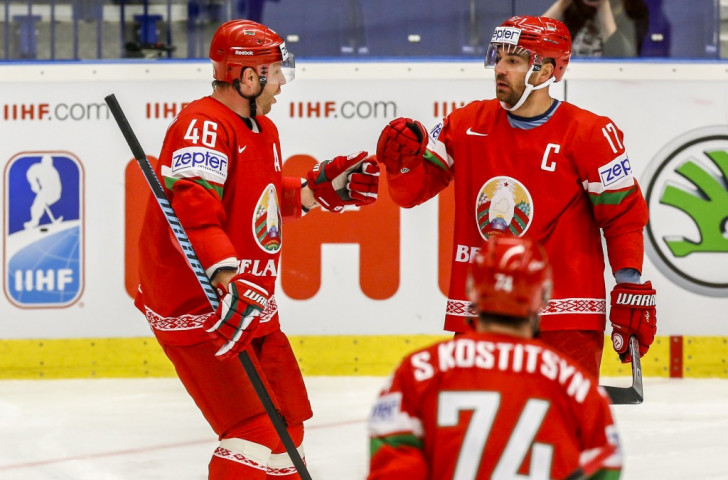 Belarus sealed the final qualification spot for the quarter-finals of the Ice Hockey World Championship with a narrow 3-2 win over Norway in Group B in Ostrava, Czech Republic.

The Belarusians only needed a point to seal a berth in the last eight and it appeared they had their place all but wrapped up after goals from Alexei Kalyuzhny, Dmitri Korobov and Andrei Kostitsyn put them 3-0 up at the midway point of the match.

But Norway launched a spirited fightback and pulled the deficit back to just a single strike thanks to Patrick Thoresen and Mattias Norstebo.

Belarus managed to hold on to squeeze through to the next round, where they face the unenviable task of trying to beat a Canadian side who have looked in superb form throughout the competition.

The reigning Olympic champions finished their round-robin campaign in emphatic style as they crushed Austria 10-1 in the opening game of the day to ensure they ended Group A with a 100 per cent record.

Tyson Barrie got Canada off to the perfect start and they had effectively sealed victory by the end of the first period as Matt Deuchene, Tyler Hall and Aaron Ekblad all found the net to give their side a 4-0 lead.

They did not take their foot of the gas, though, as they continued to pepper a desperate Austrian team with attacks, and Jason Spezza and Jordan Eberle stretched the lead even further in the second period.

Dominique Heinrich pulled one back for Austria early in the third but it mattered little as Nathan MacKinnon made it 7-1, before Spezza got his second of the match and Brayden Schenn added a ninth.

Deuchene completed the rout late on to end a miserable outing for Austria, who suffered relegation to Division I Group A, along with Slovenia.

Elsewhere on a packed day of action, the United States needed an overtime winner from Jack Eichel 30 seconds from time to beat Slovakia 5-4, a result that saw them finish top of Group B.

They will entertain Switzerland in the last eight as they claimed fourth in Group A, ending their campaign with a 2-1 shootout defeat against hosts the Czech Republic.

Despite falling to a tight 3-2 defeat at the hands of France, Latvia managed to survive the drop by the skin of their teeth, finishing ahead of Austria only on goal difference in a dramatic ending to the group phase.

Finland and Russia, both already safely into the next round, played out a thrilling contest which saw the Fins on the right side of a 3-2 scoreline after a shootout.

They will face hosts Czech Republic in the last eight while Russia go up against Sweden.

The competition is due to reume on Thursday (May 14) following a rest day tomorrow.