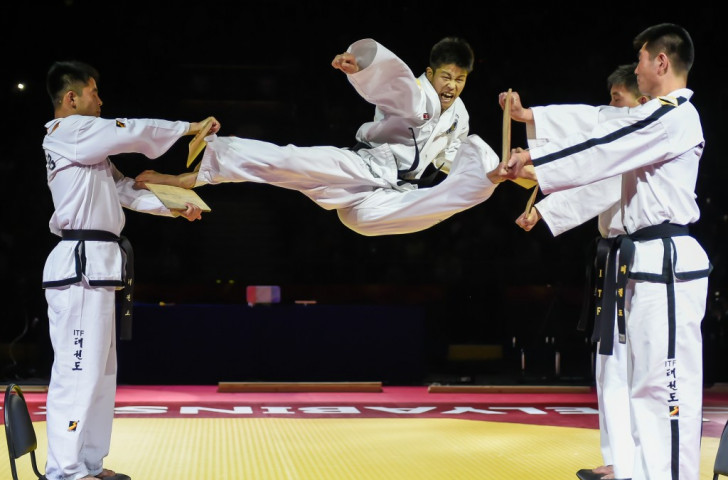 Relations between the two traditional rivals to represent the sport have been improving ever since the signing of a Memorandum of Understanding during last summer's Summer Youth Olympic Games in Nanjing, following much cooperation between WTF head Chungwon Choue and his ITF counterpart Ung Chang.

But inviting an ITF delegation to participate at a WTF Opening Ceremony, is unprecedented and a more concrete gesture of harmony, described by International Olympic Committee (IOC) President Thomas Bach today as a "rapprochement in the best interests of sports and athletes around the world".

Although techniques and basic formats seen in the two styles are broadly similar, ITF-taekwondo places a heavier emphasis on self-defence, while the WTF has better embraced the competitive side ever since its formal inclusion onto the Olympic programme at Sydney 2000.

This "self defence" focus was evident throughout the ITF's entertaining 30-minute cameo here this evening as the athletes - consisting of 13 North Koreans supplemented by two each from Russia and the Czech Republic - engaged in repeated bouts of aggressive wood-breaking blended with staged combat.

One highlight came when the three female members of the group were mock-mugged by physically larger males, only to leave all of their opponents strewn on the mat with a devastating array of kicking and punching which provided a strong advert for another important theme, of gender equality, as well as unity.

The WTF exhibition that followed, featuring mostly South Koreans but also several Czechs and Russians, contained slightly less in terms of dramatics but more than made up for it with some extravagant displays beautifully choreographed to rousing classical music.

Both performances were enjoyed by a packed-to-capacity crowd here, with an audience consisting of both athletes and local supporters clapping and cheering along throughout, whooping in impressed incredulity at some of the stand-out moments.

The demonstrations formed the highlight of a Ceremony that begun with a series of exquisite dances, reviving memories of another Russian Opening Ceremony at the Sochi 2014 Winter Olympics last year.

It was followed by speeches from dignitaries, including WTF President Choue, who praised the host nation for their organisation, hailing how Russia is a "sports loving country".

Athletes and flags from all 139 nations participating at the Championships were then paraded, including from the WTF's newest member nation, Kosovo, the national flag of which was raised despite some fears it would not be due to Russian opposition to the independence of the Balkan Republic.

The Ceremony came after an opening day of competition here which included preliminary action in the men's under 58 kilograms and women's under 46kg divisions, ahead of the first sets of medals being awarded in these two events tomorrow.

But there was no doubt what was the days most poignant moment, with the ITF-WTF collaboration deemed all the more significant by the association of the two with North and South Korea respectively, two nations which remain officially at war and enjoy little in the way of collaboration in any field.

When questioned about this diplomatic significance, ITF spokesman George Vitale insisted it is a sporting rather than political relationship but admitted "cultural and sporting exchanges can be very positive in building some sort of awareness and understanding", adding: "If there are side benefits, that’s marvelous".

"We have been waiting for this moment for a long time," said the new WTF secretary general Hoss Rafaty, a former ITF official, who along with Choue, has done much to improve relations.

"It is a new beginning and chance for taekwondo to become one unit, one family."

Discussions are now due to take place between Choue and Chang - the North Korean International Olympic Committee member who was unable to attend today due to a "busy" domestic schedule - as to when ITF athletes will be able to compete at WTF level.

This could mark the first time any athlete from North Korea has competed in an Olympic taekwondo competition.