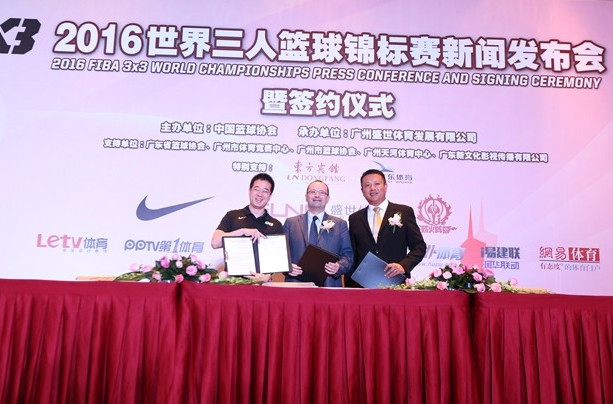 It will mark the third edition of the biennial event and the first time it has been held outside Europe after the inaugural event in 2012 took place in Athens in 2012, following last year in Moscow.

Taking place over five days from October 11 to 15, the tournament will take place just outside the Tianhe Sport Complex, within view of the iconic 600-metres tall Canton Tower, with all games to take place on one court.

A total of 20 male and female teams will participate, with men's dunk, women's skills and mixed shootout contests taking place as well as normal action.

"It was heart-warming for me to see how popular 3x3 basketball has become in China when I attended the 2014 Youth Olympic Games in Nanjing and I quickly realised this is a nationwide phenomenon."

Selection of teams will be based on the FIBA 3x3 Federation ranking, which includes sport and development criteria, thus allowing both the strongest teams in the field as well as the most active countries to participate in the event.

Serbia and Qatar have been the male winners so far, while United States have won both editions of the women's competition.

While the five-a-side game has rapidly increased in popularity in the world's most populous nation following the success of the Beijing 2008 Olympic competition, China is also one of the most successful 3x3 nations.

The Chinese Basketball Association (CBA) is planning to launch a brand new 3x3 league in China, acting as a direct qualifier for the city-based FIBA 3x3 World Tour, of which four legs will be staged there n in 2015.

"We are thankful to FIBA for granting the 3x3 World Championships to China and to Guangzhou for hosting such an important tournament,"  said Li Jinsheng, the CBA vice-director, who is also in charge of 3x3.

"This is the first time that China hosts a 3x3 World Championships and it will significantly improve the 3x3 development in China and increase basketball popularity."

China will be hoping for a major events double in the sport this year, with the country also hoping to host the 2019 FIBA World Cup ahead of a final decision being announced on June 18.