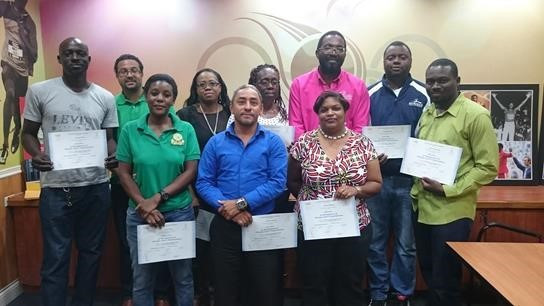 The main objective of the ASMC is to stimulate change within National Sporting Organisations (NSO) using a case-study approach.

It specifically focuses on the management of Olympic sport organisations, human resources, finance and marketing, as well as the organisation of major sporting events.

"To make a positive impact and transform sport in Trinidad and Tobago, we must be brave, courageous and we must not be afraid to fail and stumble because it is by failing and stumbling that we will learn to improve and fulfil our true potential,” said TTOC President Brian Lewis.

Nicholas Martinez, Kabir Hosein and Kecia Hosein of the multi-sport Harvard Club, and Richard Jones, the Sports Company of Trinidad and Tobago's sports service officer, were among the dozen awardees accepting a diploma in the “Management of Olympic Sport Organisations” at the Olympic House.

“I was extremely excited to be selected to participate and the programme exceeded my expectations,” said Kabir Hosein.

“My biggest take-aways from this experience were the importance of human resource management in managing a NSO, setting and implementing realistic short-term, mid-term and long-term goals for a strategic plan, and composing sponsorship proposals.”