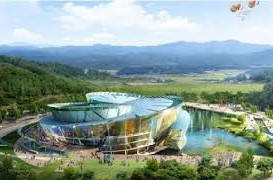 The town, located in the tourist district of Jeolla Province in the centre of the country 283 kilometres from South Korea's capital, was awarded the Championships at a meeting of the World Taekwondo Federation (WTF) Executive Council ahead of Samsun in Turkey.

Muju's bid benefited from the opening of a new taekwondo centre, which can accommodate 4,500 spectators, last year in which the Championships will take place.

It will be the seventh time the biennial event has taken place in South Korea, and the first since the 2011 Championships in Gyeongju.

It is estimated that the event will have an economic value of 20 billion won (£12 million/$18 million/€16 million) to the region.

The previous biggest international sports event Muju had hosted was the Winter Universiade in 1997.

"South Jeolla will host the event in a way that can help improve the image of the country and the Province and to help boost the economy."

Meanwhile, the appointment of Dallas-based businessman Rafaty as secretary general, a long-term replacement for Jean-Marie Ayer, is particularly significant as he started his career within the rival International Taekwon-do Federation (ITF).

It is hoped he will act as a pacifier between the two bodies.

Relations between the two have improved considerably in recent months and, for the first time, the ITF are present here for this year’s World Championships, where they will participate as part of the Opening Ceremony on Tuesday (May 12).

Rafaty was awarded a taekwondo third dan by the ITF before shifting organisations, and the official has served as special assistant to the WTF President since 2007 as well as President of the WTF International Foundation since 2008 and chairman of the WTF Expansion Committee since 2009.

“We are delighted to announce the appointment of Hoss Rafaty as the WTF secretary general," said President Choue, following the meeting.

"I have no doubt that he will contribute greatly to the future development of the WTF.

"His relationship with the ITF will help enhance the future cooperation between our two federations and strengthen the world taekwondo family.

“This is a very important time for the WTF as the Olympic Movement enters into a new era under IOC President Bach’s visionary leadership and Olympic Agenda 2020.

"We are committed to being a valuable partner to the Olympic Movement and we believe that our latest administrative appointments will ensure that we continue to innovate and evolve as we aim to provide the best sport for our athletes and millions of fans around the world.”

Following the raft of announcements revealed today, tomorrow's WTF General Assembly could be a slightly quieter affair, although President Choue has revealed that the subject of the WTF's continued affiliation with SportAccord will be on the agenda.

This follows the decision of the International Boxing Association to suspend their membership last week, and withdraw from the next edition of the World Combat Games, a SportAccord-organised event in which taekwondo also participates.

Choue insisted it was not up to him to make it decision, but for the membership as a whole, although he did admit to have been "surprised" by the critical words of SportAccord and International Judo Federation President Marius Vizer about the IOC and its President Thomas Bach uttered at last month's Convention in Sochi.

The WTF is also one of 27 summer federations to have signed a letter supporting the Association of Summer Olympic International Federatons' decision to "dissociate" its membership.