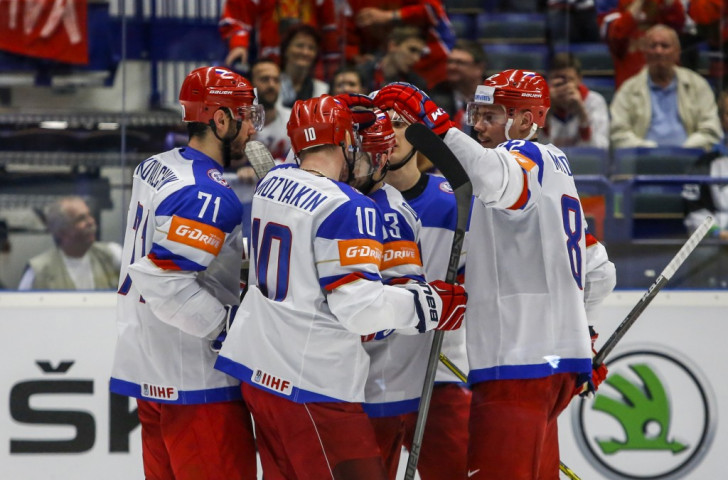 Defending champions Russia returned to form in emphatic style to surge back to the summit of Group B with a thumping 7-0 win over Belarus at the men's Ice Hockey World Championships in Ostrava, Czech Republic.

Despite claiming three wins in the tournament before the meeting with Belarus, the Russians had struggled to find their rhythm until they made light work of a Belarusian side who had beaten the United States earlier in the week.

Captain Ilya Kovalchuk broke the deadlock in the first period with a low shot that found the back of the net, before Vladimir Tarasenko doubled their lead early in the second.

Vadim Shipachyov got his side’s third by rounding off a well-worked move and Artemi Panarin’s rasping backhand made it 4-0.

They did not let up in the third period however as they continued to demonstrate their attacking finesse, and Sergei Shirokov, Yevgeni Dadonov and Yevgeni Malkin all got in on the act to inflict the heaviest defeat at a World Championship between the two sides.

Olympic champions Canada maintained their impressive start to the competition with their fifth straight win, although they were made to work much harder than they might have thought by a dogged French outfit, whose performance defied their current seventh-place standing in Group A.

Tyler Seguin bagged the first Canadian goal in the opening period and Jordan Eberle then stretched their advantage shortly after.

France, however, remained defiant and pulled one back through Julien Desrosiers to round off a frenetic first period, before Canada restored  their two-goal lead in the next stanza thanks to Seguins second of the match.

That gave Canada a 3-1 lead and they seemingly looked well on their way to another win but third period goals from Yorick Treille and Damien Fleury levelled the pulsating contest.

But, it was to end in disappointment for the French side as Eberle bagged the winning goal to tie-up a 4-3 victory and cement their position at the top of their group.

Elsewhere in Group A, Latvia beat Austria 2-1, and Sweden secured a vital 2-1 overtime victory against Switzerland to move a step towards the next round.

Olympic bronze medallists Finland cruised to a hard-fought 3-0 win over Slovakia, which keeps them in second place in Group B but they left it late to take victory.

Denmark also enjoyed a successful day as they thrashed Scandanavian counterparts Norway 4-1 as they picked up their first win of the competition.