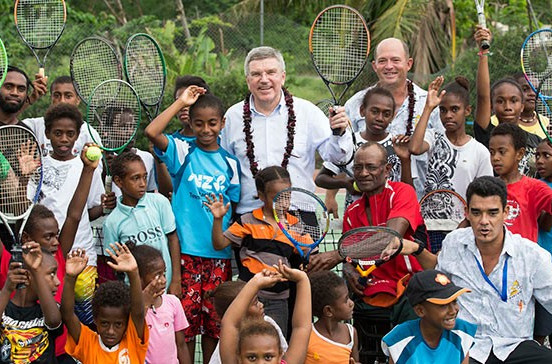 International Olympic Committee (IOC) President Thomas Bach has praised Vanuatu for its rebuilding effort since the devastating impact of Cyclone Pam earlier this year, as he discussed how to distribute the grant of $500,000 (£330,000/€440,000) promised to the Pacific island nation.

In this the latest leg of a tour of Oceania which has already included Australia and Fiji - a trip planned before the devastating storm which killed up to 16 people and affected around half of the population in March - Bach met with a variety of sporting and political leaders and enjoyed a customary bout of sporting participation, this time in tennis.

He first visited a hockey and multisport centre catering for basketball, football, futsal, table tennis, boxing, volleyball, netball and cricket, which usually welcomes more than 1,000 young athletes a day, as well as serving as a base for leagues and competitions, before attending another sports hall where huge panels had been ripped off by the high winds as well as a rowing club that has already benefited from Olympic Solidarity Funding.

“We hope that our contribution will give hope to the whole population," said the German.

"When a nation’s athletes thrive it has a positive effect on the whole community, and when young people get a chance to play sport it can bring a whole community together.

“Vanuatu is starting to rebuild, and we are here to take part in this process by helping to rebuild the nation’s sporting infrastructure.

"We want to support the athletes in this region so that they can return to their sporting life as soon as possible, and prepare for their next sporting challenges.”

Bach and his entourage, which included IOC director general Christophe De Kepper, also met with Vanuatu President Baldwin Lonsdale for a ceremony in which Fiji's Oceania National Olympic Committee President Robin Mitchell was awarded the "Order of Vanuatu" for his services to sport in the country.

The official was then welcomed to the headquarters of the Vanuatu Association of Sports And National Olympic Committee by the body's President, Antoine Boudier, opening a small museum dedicated to sport and athletes from Vanuatu.

“We came to Vanuatu to encourage you, we are leaving inspired by you," Bach said during the opening.

"We are inspired by the optimism and by your true Olympic spirit by never giving up.

"We are happy to contribute to rebuilding your country and, through sport, give hope to people and particularly youth in Vanuatu.

"Keep up your commitment to and your actions for sport and the young people of Vanuatu - it will yield tremendous benefits for your society.

"That is something that Mother Nature cannot ‘blow off course’."

Vanuatu, the island nation some 1,750 kilometres east of Northern Australia which has a population of around 267,000, has competed at every Summer Olympics since Seoul 1988, as well as multiple editions of the Commonwealth and Pacific Games.

No Olympic medals have yet been won, although women's beach volleyball pair Elwin Miller and Henriette Iatika finished a superb ninth at the 2013 World Championships in Poland and are currently hoping they will generate enough funding to compete at Rio 2016.

Bach is next due to make a two-day visit to New Zealand, starting tomorrow.