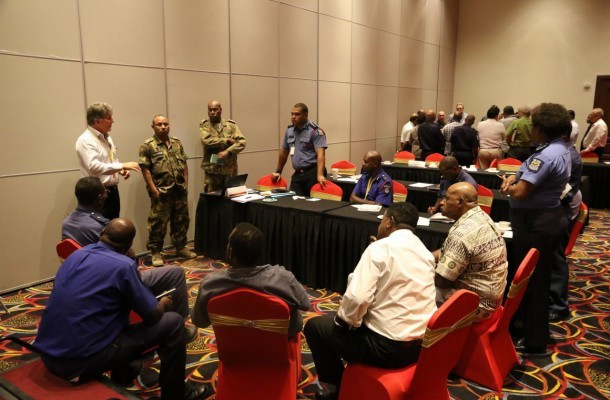 Port Moresby 2015 has conducted a Games-time security operations workshop, with more than 50 members of its Public Safety and Security Committee in attendance.

The purpose of the C3 (Command, Control and Communication) workshop was to begin the development of the emergency response and incident management plans, policies and procedures heading into July's Pacific Games, and help participants understand how their roles as decision makers can impact one another in the overall safety and security operations.

It was conducted with the assistance and partnership of Australian companies Dynamiq Group Ltd and Falck, who are experts in the field of emergency response plan development, implementation and training, and Semacare through Stewart Kreltzheim, who is the Country Fire Authority incident controller in Victoria, Australia.

“Great communication between all partners is integral to the success of the Games,” said Port Moresby 2015 chief executive Peter Stewart.

“This workshop is the start of developing theory and understanding that will be translated to paper policy and procedure.”

The areas of particular attention at the workshop were the classification of incident threat and risk levels as well as grasping the awareness to make a decision on whether to handle issues at Venue Operation Centre (VOC) level or escalate them to the Main Operation Centre (MOC).

Each Games venue will have a VOC, which is made up of sports competition managers, venue facility managers, venue operations managers and venue command centres, while the MOC will house representatives from key stakeholder agencies with decision making powers.

Committee members agreed that most issues should be handled at VOC level; however issues or incidents could be escalated to the MOC level if it will affect the normal operations of the venue and the Games.

“The workshop ensured certain interoperability challenges were identified and addressed, as well as to clearly define roles and responsibilities of all partner agencies in the delivery of Operation "Safe Games" which is the security support to the Games,” said Royal Papua New Guinea Constabulary’s (RPNGC) Chief Superintendent David Manning, who heads the Public Safety and Security Committee.

“Under the operation "Safe Games", a key area that we are focusing on is the public safety efforts and while it is a relatively new role, the RPNGC and its partners are putting every effort into understanding the expectations of stakeholders and ensuring it features in the security to the Games as well as future operations.”

“Major events like the Pacific Games continue to test our capabilities of the RPNGC and its partners,” added Manning.

“But in saying that, the Games, provides an invaluable opportunity to establish and develop relationships with both our traditional and new partners in the Government security arena, whereby we can build a solid foundation to position ourselves to endeavour to deliver contemporary security services.”