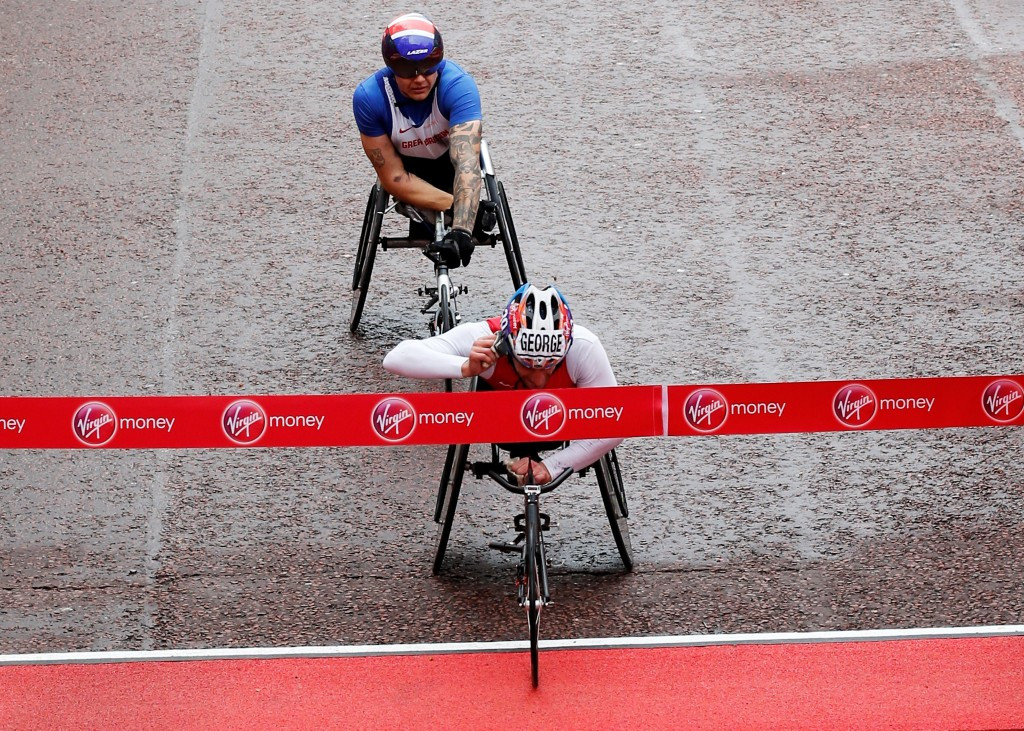 In what was a frantic ending to the T53/54 race, which doubled as the International Paralympic Committee (IPC) Athletics Marathon World Championships, George and Weir were neck and neck until the American pulled away in the final few metres to cross the line in a time of 1 hour, 31 minutes 31 seconds ahead of Weir's 1:31:32.

The race was billed as a straight head to head between Weir, who was second here last year, and Switzerland’s Marcel Hug, however Hug was forced to withdraw at the 20 kilometres mark because of a puncture and the day belonged to Paralympic sprint gold medallist George, who became the first United States winner of the men’s wheelchair event.

“I knew I had a shot of winning and tactically it worked out perfectly for me,” he said.

“I stayed out of trouble as you never know what could happen on a wet course like this.

“When Marcel pulled out there was a slight sigh of relief as he is a great racer.

“There’s always hype around David and Marcel because they are phenomenal racers but we have a deep field and like today showed anybody can win.”

It proved to be a successful day all round for the US as the ever dominant Tatyana McFadden claimed her third straight London Marathon triumph, surging to a commanding win, in which she broke her own course record by nearly four minutes with a time of 1:41:14.

The American continued her superb streak in marathon events with a comfortable victory as she crossed the line with no other athlete in sight.

Manuela Schär of Switzerland was her nearest challenger and finished in a time of 1:43:56, while McFadden's compatriot Amanda McGrory was third, 5:11 adrift of her team mate’s incredible winning time.

In the women's T12, Russian Elena Pautova smashed the world record as she posted a blistering 2:58:23.

Morocco’s El Amin Chentouf was also a star performer as he retained the men’s T11/12 crown with a world record time of 2:21:33.

The US dominance continued as Raymond Martin pipped Spain’s Santiago Sanz in the men’s wheelchair T51/52 as he powered round the course in 1:52:27.

Elsewhere, Brazil's Aniceto Antonio dos Santos was victorious in the men’s T13 event, clocking 2:35:42, and Spain’s Abderrahman Ait Khamouch was also in world record-breaking form as he won the T45/46 race in a time of 2:26:54.