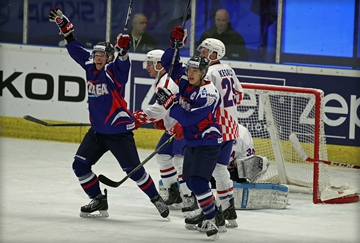 South Korea have claimed the gold medal and secured promotion back to Division IA of the Ice Hockey World Championship at the International Ice Hockey Federation (IIHF) Division I Group B tournament in Eindhoven.

In the first game of the day South Korea had defeated Croatia 9-4 at the Ice Sport Centre, but they had to wait until the conclusion of Lithuania’s match against Great Britain to find out if they would go through, with the latter needing only a point from their final match to seal the overall win.

However, it was not to be for the British squad as they went down 3-2 in the game to seal the victory for South Korea.

"I feel sorry for them [Britain]," said Lithuania’s Darius Pliskauskas.

"We played one heck of a game today and made me feel proud of my country.

“This win means so much for us.

“That such a small country can defeat the likes of Great Britain and The Netherlands is simply amazing."

The result sees Britain finishing second ahead of Lithuania, with Croatia in fourth place.

The final match of the event spelled the demise of the hosts as they lost 3-1 to Estonia, who secured their spot in Division IA.

The result means The Netherlands were relegated to Division IIA for the first time in 16 years.

Elsewhere in the Division II Group A tournament in Iceland, Australia were relegated to Division IIB after suffering a 4-10 defeat at the hands of Belgium.

The other matches in Reykjavik were a 3-2 win for already promoted Romania over hosts Iceland and a 4-3 victory for Serbia over Spain.

In the Division II Group B event in South Africa, the hosts suffered a 7-3 defeat by already promoted gold medallists China and were relegated to Division III.

Also in Cape Town there was a 5-1 win for New Zealand over Bulgaria, while Mexico overcame Israel 6-3.

Meanwhile, the Division I Group A tournament got underway in Kraków, Poland today with a 4-2 win for Hungary over Japan.

There was also opening day success for Kazakhstan, who defeated Ukraine 5-2, and Italy, who overcame the hosts 2-1.