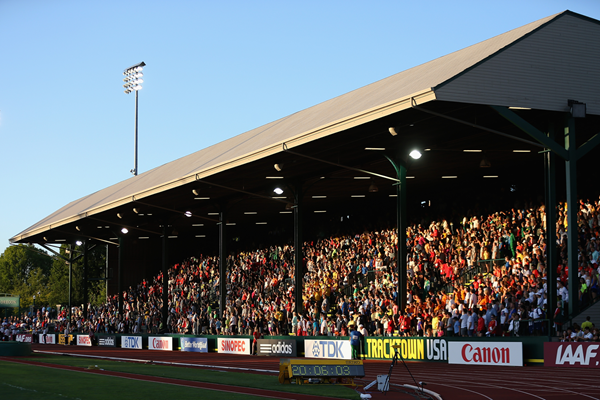 The United States will host the International Association of Athletics Federations (IAAF) World Championships for the first time after Eugene in Oregon was awarded the 2021 event.

In a statement, the IAAF said the decision to bypass the normal bid procedure, announced following the second day of the its Council meeting in Beijing, “was taken in response to what was seen as a unique strategic opportunity to host the IAAF World Championships for the first time in the USA.”

The statement added that Eugene, which was unsuccessful in bidding for the 2019 IAAF World Championships last November, awarded to Doha, had  “uniquely combined the commitment of the funding by the Governor of Oregon with the financial support of the United States Olympic Committee and the guarantee of NBC to produce and broadcast in cooperation with Universal Sports the Championships live across America.”

The IAAF statement continued:  “Council’s decision was taken in order to grant the sport’s access to one of the most historically successful countries in Athletics as well as the most powerful economy in the world.

"There have been precedents in the past, most recently in the award of the 2007 IAAF World Championships to Osaka, Japan, which was also done without a bidding process.”

But the decision was criticised by Björn Eriksson, President of Swedish Athletics, who had been hoping to put forward Gothenburg as a candidate.

"We are deeply disappointed and upset over this decision as we had expected to at least be allowed to submit our bid according to the procedure and timetable previously announced by the IAAF," he said.

"To award the event without a proper open bidding process is a violation of the fair play criteria that should govern all aspects of our sport.

“This clandestine decision could in no way be in the interest of the sport of athletics.

Under Eugene's proposal for 2019, the Championships would have been staged at Hayward Field with the size of the stadium being temporarily increased from its current capacity of 10,500 to 30,000, the minimum size stipulated by the IAAF.

Nicknamed TrackTown USA, Eugene and the city's University of Oregon have been the site of the past two US Olympic trials for Beijing 2008 and London 2012 and will host next year's event to pick the American team for Rio 2016.

The 2016 IAAF World Indoor Championships are scheduled for nearby Portland, Oregon's largest city.

The US is the most successful country in the history of the IAAF World Championships since it was launched in 1983, having won a total of 300 medals, including 138 gold, but they have never hosted the event.

Only last month IAAF President Lamine Diack had warned that the US risked never being able to host the sport's flagship event due to the country's lack of suitable venues to stage major track and field events.

But Diack, who will be replaced as IAAF President by either Sebastian Coe or Sergey Bubka at the Congress on August 19 ahead of the Beijing World Championships, revealed they had made the decision to award Eugene the 2021 event because of a unique set of circumstances.

“In granting the Championships to Eugene the IAAF Council have made a clear choice on a strategic decision that enables us to take advantage of a unique opportunity that may never arise again, whereby public authorities, the private sector, the national Olympic Committee, NBC and a particularly enthusiastic public are joining forces," he said.

“Although this decision departs from the usual procedure, I am delighted that my Council colleagues understood the enormous opportunity presented to us to access a key market and have taken a decision in the interest of the global development of our sport.

The decision will inevitably be interpreted as a boost for Boston's bid to host the Olympics and Paralympics, although the Championships will take place four years after a decision is due to be made by the International Olympic Committee in Lima in 2017 on the host city for 2024.

Vin Lananna, who led Eugene's bid for the Championships, commented: "I thank President Diack and the Council in supporting us.

"We promise to deliver an outstanding Championships for the sport of track and field in America and around the world.”