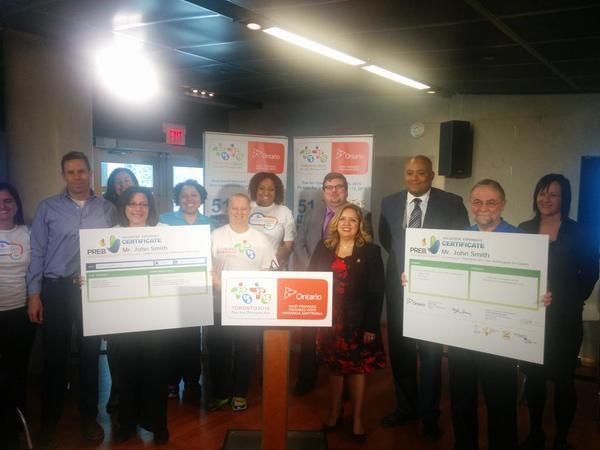 Ontario have launched two volunteer initiatives aimed at increasing volunteerism and job placements in the Province as a legacy of the Toronto 2015 Pan Am/Parapan Am Games in the Canadian city.

Complete online, the certificate will detail the activities performed by a volunteer, the skills they acquired and any special achievements or training received and will provide see volunteers rewarded with a professional reference for their work.

Games-time volunteers will be among the first to receive their certificates in September, while they will also be able to sign up to Ontario’s first bilingual online volunteer database titled SPARK Ontario.

The volunteer database is set to compile volunteering opportunities and other resources into a single website, with the aim that 23,000 Games volunteers will benefit post-Games.

The two initiatives were launched during National Volunteer Week, which takes place in Canada until Saturday (April 18).

“One of the major benefits of hosting the TORONTO 2015 Pan American and Parapan American Games is the lasting legacy it will leave behind,” said Michael Coteau, the Minister responsible for the 2015 Pan/Parapan Am Games.

“Games organisers will train 23,000 volunteers who will continue to use their skills and experience long after the last medal is awarded, joining millions of dedicated volunteers across the Province.

“SPARK Ontario and the new PREB-Ontario Certificate programme will enhance and transform volunteerism in Ontario while increasing opportunities for employment.”

The volunteering programmes are the latest effort from Ontario to ensure a positive legacy of Toronto hosting the Pan Am Games from July 10 to 26 and the Parapan Games from August 7 to 15.

The Province have already invested $5 million (£3.5 million/€4.5 million) over three years as part of its  promotion, celebration and legacy strategy to support volunteerism.

“These projects, providing online access to volunteer opportunities and ushering in a new era of skills-based recognition, significantly strengthen the volunteer sector while enhancing the benefits and impact of volunteering.”

The launch of the initiatives follows the news that 60,000 people have applied for the 23,000 volunteering positions across both Games, which will be the largest volunteer team in Canadian peacetime history.

“We’re both grateful and inspired by the way people from all walks of life have responded to our call and offered to help stage the best Pan Am and Parapan Am Games,” said Saäd Rafi, chief executive of Toronto 2015.