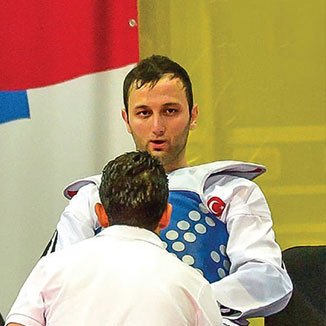 Watching Haşim Celik fight, one is reminded of a comment by Russian Taekwondo Federation President Anatoly Terekhov: "You would not realise he is disabled."

In his K44 under 75 kg match against Boris Chepurenkov at the 5th WTF World Para-Taekwondo Championships in Moscow in 2014, the 23-year-old from Turkey adopted a wide stance, weight forward, stalking his opponent. Switching feet fluently, he controlled the distance, firing fluid round kicks off both forward and back legs, varied with a front pushing kick.


Although he was unable to fully deploy the point-winning jumping back spinning kick he had landed three times in his first match against Russian Makhdi Amarov - Chepurenkov jammed the kicks - Celik's rear-leg round kick, fired from the clinch-break, made an audible "thwack" as it knifed in under Chepurenkov's guard.

Final result: 5-1. That victory, following his earlier win, put Celik comfortably through to the quarter-finals.

Off the mats, Celik analyzed the match. "My coach ordered me to control the fight and to watch the opponent - to see his power, his speed, his empty spot," he explained. "After that, he ordered me to fire my techniques into the open spot. It got good results."

But things did not do either Celik or his coach's way in his semi-final match against Russia's Magomedzagir Isaldibirov.

Although Celik dropped his opponent twice, the hits were not registered on the PSS and the pacey Isaldibirov returned fire with a flurry of kicks, moving ahead in the scoring.

With the clock ticking, Celik unleashed a full arsenal of high-scoring techniques - jump spinning round kicks and jump spinning back kicks - keeping his opponent under pressure right up to the bell. But the final score was still 5-2 to the home-crowd favourite - who eventually took silver. That left Celik with a deserved bronze in one of the Championships' most competitive categories.

Looking downcast in the stands after his loss, Celik managed to summon up a smile and a shrug for those giving their condolences. "Maybe next time," he said.

Soft spoken and with a thoughtful demeanor, Celik, who was born with missing fingers and toes, was always shy: "When I was a child, I was so embarrassed because of my disability."

His father forced him socialise with other children and registered him on a football team, but the young Celik used to hide his hands behind his back - which did little for his play. His father, seeing this, offered him a financial reward for every goal he scored. The tactic worked, and his football improved.

Celik, currently based in Germany, started taekwondo after watching one of the sport's superstars, Servet Tazegül, at the Bavarian Championships in 2006. "I saw Servet doing all these tremendous kicks, these fancy looking techniques, I asked him how he did them and he told me to come and learn too," Celik recalls. "So I did."

The two train in the same club and became very close - to the point where Celik was the witness at Tazegul's wedding. (Tazegul was on his honeymoon during the Championships in Moscow, but still messaged Celik to wish him luck. "Even on his honeymoon, Servet is thinking about taekwondo!" Celik said.)

Celik had a formidable talent for the sport. This, married with a daily, after-school training programme, won him silver at the European Championships in Bucharest in 2013 and a gold at the World Para-Taekwondo Championships in Lausanne in the same year, making him one of sport's top players.

"His big advantage is he can attack with both his front and his back leg and his distancing is very good," said Turkish Coach Yilmaz Polat. "And he always listens to my orders during matches."

Coaching may be one of the reasons for Celik's pre-match calm. While he admits that he is nervous before matches - he does deep breathing exercises on match-day mornings - he claims he does not focus on who his upcoming opponents are, letting his coach take care of that. During events, he manages stress by talking with his team mates about anything but taekwondo. Aside from taekwondo, Celik's goal is to finish university - he is a student at Germany's Friedrich Alexander University - and become a lawyer or a judge. But he also hopes his chosen sport will enter the Paralympics.

If it does, he could become a rich man.

"Olympic sports are very well supported by the Turkish Government," said fellow Turk and World Taekwondo Federation auditor Ali Sagirkaya, who estimates that Tazegül was awarded around $1 million for his Olympic gold medal at London 2012. But currently, taekwondo is not in the Paralympics, meaning that there is little cash available in the sport - even in a country as taekwondo-crazy as Turkey.

However, for Celik, none of this is important. "I don't do this for the money, I am in love with this sport," he said. "If I raise the Turkish flag over the arena, that is my reward; it is worth millions to me."